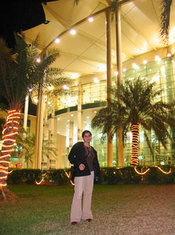 I hate Doha’s City Center. It is crowded, noisy with lots of sleazy men who never cease to stare at any member of the female gender, giving a full examination to whatever they regard as her most notable attributes.

When I go there, most of the time I get dizzy and overwhelmed by the large number of people, many of them pushing and shoving to get their hands on their desired merchandise. I dread going there, as I know I will end up fuming, cursing, and sometimes — in severe cases — pulling the hair of certain individuals.

But still, surprisingly enough, not a week passes without our visit to the infamous mall. Why?Simple. No Doha resident can exist without frequenting the mammoth mall because all you need is there and I mean everything.

From restaurants to movie theaters to shoe shops and mobile vendors, City Center is bound to suck you in. It’s mainly what living in Doha revolves around. Without it you are just a lost soul in a foreign land. I believe I have a love-hate relationship with the place. I dread it but enjoy what it has to offer and I keep coming back.

We took these pictures of it on one of our frequent visits there! It is supposed to be the biggest mall in the Middle East, although apparently the "biggest" title is up for grabs now, with Dubai pushing to go still bigger. Its a constant tug of war between these two Gulf nations, with Dubai clearly in the lead.