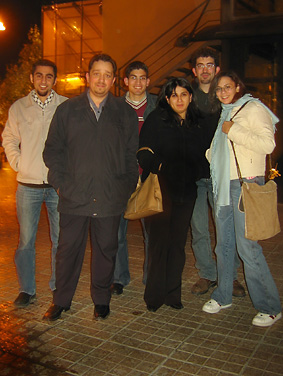 Last night we had our first Jordanian bloggers meet-up and believe me when I tell you, it was tons o’ fun. Seven bloggers showed up: Roba, Isam, Ammar, Nader, Zaid, the husband and I. As I expected, our Jordanian blogging community is exceptional. [Click any pic for an enlargement]

Everyone is smart, friendly and articulate with a great sense of humor. After we gathered and introduced ourselves we spent a couple hours discussing various issues ranging from the Iraq War to the advent of internet in Jordan to the art of blogging … of course.

For those interested, I will do my best to highlight what went on last night:

Isam, the programmer behind Jordan Planet, talked intensely about the importance of blogging and the image of Jordan it creates for the outside world. He revealed many ambitious ideas for Jordan Planet including creating an Arabic version of the site. Citing the success of Persian bloggers, he pointed out how powerful blogging can be.

Roba expressed some frustration with the lack of awareness about blogging in Jordan, particularly among the youth. “Very few of my friends know what a blog is,” she complained. She also blamed the lack of internet access in Jordan for the limited success of blogging in the kingdom.

Nader shared Roba’s frustration, saying the friends that knew of his blogging labeled it a “waste of time … They just don’t get it,” he said.

Meanwhile, Ammar is convinced that many Jordanians don’t realize that they have the right to express themselves. He discussed how the concept of speaking out is just not injected into today’s youngsters and never taught to kids in schools.

Zaid, our quiet blogger, said that the reason he doesn’t blog that often is due to his inner fear of being misunderstood. But he promised to try to post more regularly.

The husband and photographer of our gathering (who also made a bonus image for the event) weighed in on the technical side of blogging and what works best to perfect the art. As for me, well, I was loud and obnoxious as usual. I had a blast!