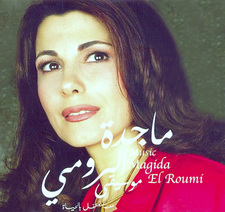 Last night, we once again conquered fear of another Doha terrorist attack and made our way to the city’s iconic Sheraton Hotel to see Lebanese singer Majida al-Roumi in concert as part of the Doha Cultural Festival. It was exhilarating. We had a blast! Majida gave a top-notch performance that I will personally remember for years to come. She kicked off her concert by praying for the safety of Qatar, something I found very considerate and unexpected.

Her first song was Beirut ma bitmout, or ‘Beirut won’t die.’ She performed it so passionately. It was very touching in light of the political tensions occurring there these last months. The audience — a good portion of whom were Lebanese — clapped and cheered as she sang the lyric calling for the "removal of the foreign hand," which I assumed was a reference to Syrian interference in Lebanon. This is the Middle East, you can never escape politics!

During the two-hour concert, Majida performed a number of masterpieces like Kon Sadeeqi, or ‘Be my friend,’ Kalimat, or ‘Words’ and 3am biesalouni 3aleik el nas, or ‘People are asking me about you.’ [links pull Real Audio feed] I surprised myself by knowing a number of her songs by heart. I guess they were buried there deep down in my subconscious.

Majida looked absolutely stunning and performed so elegantly. I can’t believe she is almost fifty. She just looked amazing.

One interesting thing happened during the concert when a group of people that appeared to be Lebanese left the hall running with mobile phone to ear. I figured something must have happened like an explosion. I was right. As we were enjoying our time listening to Majida’s tantalizing voice, a bomb exploded in yet another Christian area in Lebanon. It is very sad indeed. But I quote Majida: Beirut Ma bitmout or Beirut won’t die.

I mentioned in an earlier post that I had become over-saturated by the continual playing of the songs of Fairuz, another Lebanese diva. Last night I couldn’t help but wonder why Majida had yet to reach the pinnacle that Fairuz occupies in the hearts and minds of her Arab audience. Majida belongs at the same or even a more elevated position than Fairuz.

All in all, we had a great time! I’m still humming the tunes from the concert. I will definitely make sure to add some of Majida’s albums to our humble music collection very soon.

View all of Natasha Tynes's posts.