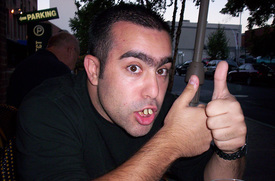 The one and only Abu Sinno (better known as Laith) made it to DC last night to showcase his acting talents in front of two Jordanian bloggers during a small-scale Jordan Planet meeting. The meeting place was a restaurant called the Peacock in the Georgetown boro of the nation’s capital.Those present included yours truly along with Beisan.

During our two-hour meeting, Abu Sinno entertained us with his jokes and impeccable imitation of key Arab figures (including both diplomats and celebrities). He also candidly shared with us his infinite passion for making movies as he talked extensively about his adventures in the City of Angels.

We had a blast! I’m looking forward to Abu Sinno’s next visit to the Metro region so that I can get my dose of Jordanian wit and wisdom! Today, Abu Sinno moved on to his next journey where he is bound to amuse and entertain yet another crowd in a different part of the globe.

I’m posting here two pictures of our meeting. The first is a photo of the animated Abu Sinno. The second is the Jordanian bloggers alongside Abu Sinno after he reverted to his more ‘normal’ appearance.