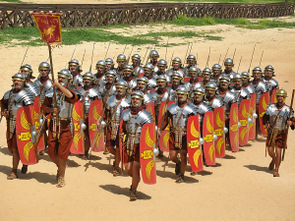 If you are residing in Jordan nowadays then make sure to take time out for a visit to the "Roman Army and Chariot Experience," a highly engaging historical show set in the Greco-Roman city of Jerash. It is a display of the long gone Jerasia-based Roman army, its weaponry and its battle techniques. The most impressive thing about this truly unique show is that it is performed by Jordanians — mostly Jerash residents — who were professionally trained to perform in the show twice a day every day of the week. According to Fawaz Zoubi, the general manager of the show, even the costumes were made locally, something I found very impressive, as they really did look quite authentic!

The show itself was entertaining, educational, and tremendously visual. It was also fascinating to see the performers speaking in Latin in front of a rapt audience. The show is definitely worth your time, although I think the entrance fee of five JD’s (20 JD for non-Jordanians) is a bit high. One thing I noticed was that the majority of the audience was foreigners. Unfortunately, there were very few Jordanians — even Arabs for that matter — among the attendees. Those in charge of the show should work on extensively advertising this unique experience to Jordanians and the Mideast and not restrict their outreach solely to tour agents. 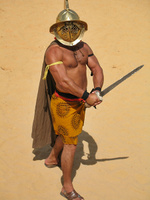 For more information on the show, make sure to check out their website: http://www.jerashchariots.com.