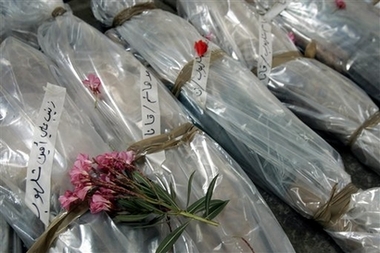 So after 60 people — at least 34 of them children — were slaughtered in an Israeli strike today, Israeli PM Ehud Olmert is indicating he wants to continue "the battle".

"We will not stop this battle, despite the difficult incidents this morning," Olmert said during Israel’s weekly Cabinet meeting, according to a participant in the meeting. "We will continue the activity and if necessary it will be broadened without hesitation."
Source: [Yahoo News]

This is beyond awful. The Israeli Army is showing the world a terrible ruthlessness. The bloodshed has to end, for the sake of humanity. Israel has made it clear that it will not stop until they disarm Hezbollah. In my humble opinion this will never happen. Hezbollah is more of a concept, an ideology, than anything else. It is an ideology fomented by the continuous frustration Arab youths face on a daily basis. You cannot kill an ideology with bombs. Meanwhile, Hezbollah’s popularity is soaring now more than ever due to the continuing Israeli attacks on Lebanon that have left many innocent civilians dead.

The Washington Post is reporting today how Arab governments that were initially critical of Hezbollah are now applauding the movement.

The United States’ Arab allies — Saudi Arabia, Jordan and Egypt — initially blamed Hezbollah for the violence, calling its seizure of the soldiers miscalculated adventures. But a high civilian death toll, widespread destruction in Lebanon and strong popular support for Hezbollah have forced a shift in their stance.

"We are in a strong position and I thank the Sayyed for his efforts," Siniora said when asked about a Saturday statement by Hizbollah chief Sayyed Hassan Nasrallah calling on the government to take advantage of Hizbollah’s steadfastness against Israeli military might. "I also thank all those who sacrifice their lives for the independence and sovereignty of Lebanon," he added.

Just for the record Siniora had always been known for being at odds with Hezbollah.

My sister who was in Damascus last week told me this morning how she was surprised to see wanton support for Hezbollah amongst the common people of Syria. She saw Hezbollah flags flying on cars while a number of people she talked with were expressing their pride and support for what Hezbollah is now doing.

Articulate Jordanian commentator and blogger Batir Wardam is wondering how many people Al-Qaeda has recruited since the beginning of this Israeli offensive in Lebanon.

Routes for violence are abundant. Organizations like Al Qaeda are ready to exploit this anger, not only against the USA and Israel but also against the Arab countries, communities and regime themselves. This is a twisted response but it is a natural result of the Israeli and American action. As I write now, and as you read hundreds of Arab Youth are being mainstreamed into the Qaeda and fundamental organizations who will provide the platform for angry Arab youth to become what we used to call them: terrorists!

Sadly enough, his argument is plausible. Israel has facilitated Al-Qaeda recruitment. I’m so frustrated. Things are going from bad to worse. The future is bleak. My children will never live in peace.