In memory of the victims of the Nov 9 terrorist attacks 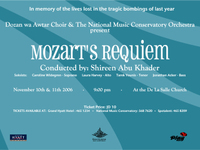 My musician sister, who recently
joined the
wonderful blogosphere, is highlighting a concert that will be held in memory
of the victims killed in the terrorist attacks that rocked Jordan on 9 November
2005. Performed by the Orchestra of the National Music Conservatory on November
10 and 11, the concert will feature Mozart’s Requiem. Part of the requiem will
also be also performed by a small group of Jordanian musicians on November 8 in the lobby of the Amman Hyatt, which was targeted
in the attacks.

Here is a quick bit of info on the Requiem as provided by the super-talented sis:

Anyone who watched the famous movie Amadeus will probably remember the
Wolfgang Amadeus Mozart’s last composition, the requiem, who wrote it in 1791
but never got the chance to finish it before his death, therefore; his friend
and pupil Franz Xaver Sussmayr completed his work.

The Requiem or Requiem Mass is a service of the Roman
Catholic Church. Its theme is a prayer for the salvation of the souls of the
departed, and it is used both at services immediately preceding a burial, and
on occasions of more general remembrance.

I wish I could be there to commemorate the memory of the innocents
who lost their lives on that dark November day. For more information, read Monty’s Melodies.