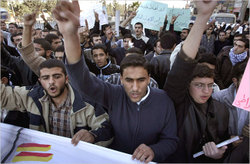 Jordan dominated the news cycle of American news stations this morning. The reason: Bush’s visit to the Kingdom to meet with Iraqi Prime Minister Nuri Al Maliki. Seeing images and sounds from Jordan on American morning shows while sipping my coffee in our Maryland apartment was, of course, exhilarating.

"Hey, look, Richard Engel is on the rooftop of the Intercontinental hotel in Amman," I told the husband with a huge smile on my face this morning. According to blogger Nas, a number of veteran reporters are currently in Amman to report the event including Katie Couric and Anderson Cooper.

Putting the news coverage aside, however, things on the ground seem tense. Blogger and good friend Hala described the security situation in Jordan in anticipation of the American president’s arrival as follows:

I realized today that there’s one version of Amman I like more than another. I don’t really like the Amman doted by soldiers decked out in their full gear, dotting the landscape like they belong. They’ve been increasing in number since Sunday – every day a little more obvious, every day more of them spilling out of the huge, green army buses blocking the roundabouts. Today, I see them chatting with school children on street corners, smoking cigarettes together while leaning against a post, raising their hands in greeting to a passing driver. They fit in, so easily – a part of the morning streets, and it puts me on edge. I hate it that they seem to belong so easily. Men in uniform. HA. So overrated.

Also, Reuters is reporting that Bush’s visit has angered Jordanians:

Jordanian Yusef Mustafa Nimer can barely contain his anger at U.S. President George W. Bush’s visit. "This is a very sad day. Bush has become a symbol of bigotry and injustice towards Arabs and Muslims," the 32-year-old engineer said just hours before Bush was due to arrive in Amman on Wednesday. "There he is slaughtering my brothers in Palestine and Iraq and is now hosted and feted by our leaders. I am ashamed."

I will be closely watching the outcome of this meeting, mainly because it might change the current drastic political course in Iraq but also because it is taking a place in my hometown — a place I miss, as I observe from thousands of miles away.