One of the most engaging articles that I read last week was one in the New Yorker which examined the repercussions of the myriad of torture scenes in the award-winning Fox drama 24. Entitled "Whatever it takes" — Jack Bauer’s famous line from the show — the article keeps tabs on 24′s torture scenes and details their impact. 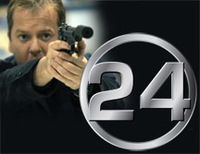 Since September 11th, depictions of torture have become much more common on American television. Before the attacks, fewer than four acts of torture appeared on prime-time television each year, according to Human Rights First, a nonprofit organization. Now there are more than a hundred, and, as David Danzig, a project director at Human Rights First, noted, "the torturers have changed. It used to be almost exclusively the villains who tortured. Today, torture is often perpetrated by the heroes." The Parents’ Television Council, a nonpartisan watchdog group, has counted what it says are sixty-seven torture scenes during the first five seasons of 24 — mo4e than one every other show. Melissa Caldwell, the council’s senior director of programs, said, "24 is the worst offender on television: the most frequent, most graphic, and the leader in the trend of showing the protagonists using torture."

The impact of the show is even being felt within the United States Army.

This past November, U.S. Army Brigadier General Patrick Finnegan, the dean of the United States Military Academy at West Point, flew to Southern California to meet with the creative team behind 24. Finnegan, who was accompanied by three of the most experienced military and F.B.I. interrogators in the country, arrived on the set as the crew was filming. At first, Finnegan — wearing an immaculate Army uniform, his chest covered in ribbons and medals — aroused confusion: he was taken for an actor and was asked by someone what time his "call" was. In fact, Finnegan and the others had come to voice their concern that the show’s central political premise — that the letter of American law must be sacrificed for the country’s security — was having a toxic effect. In their view, the show promoted unethical and illegal behavior and had adversely affected the training and performance of real American soldiers. "I’d like them to stop," Finnegan said of the show’s producers. "They should do a show where torture backfires."

The Sandmonkey wrote a whimsical entry last month in which he analyzed this most recent season of 24. I laughed out loud when I read his observations. He too pointed out that the show had more than its share of torture. "Ohh, and is it just me, or is this show a little too torture-friendly?" I have watched and enjoyed every season of 24 so far. There is something about the show’s dramatic production that grabs me. However, I agree with the New Yorker article, the show does make torture out as an effective interrogation method. While some might argue that torture is necessary in cases of "ticking time-bombs," I believe torture is barbaric and should never be applied. It is also pointless, as some interrogators have pointed out:

â€¦ But Navarro, who estimates that he has conducted some twelve thousand interrogations, replied that torture was not an effective response. "These are very determined people, and they won’t turn just because you pull a fingernail out," he told me. And Finnegan argued that torturing fanatical Islamist terrorists is particularly pointless. "They almost welcome torture," he said. "They expect it. They want to be martyred." A ticking time bomb, he pointed out, would make a suspect only more unwilling to talk. "They know if they can simply hold out several hours, all the more glory — the ticking time-bomb will go off!"

While on the issue of torture, I have to admit that it saddens me tremendously to read news items that link Jordan to torture. The last was one I read was on Rami’s blog, which detailed the story of a Jordanian living in Sweden, who is set to be deported from there, and is expected to face torture when he arrives back home.

The Swedish migration minister for Right-to-Center government, Tobias BillstrÃ¶m, came under criticism for agreeing to deport the Jordanian, but he promised that Assad will not be tortured by the Jordanian secret police. Assad was not tried in the regular Swedish court and the whole deliberations are kept secret. BillstrÃ¶m said he has enough evidence that proves Assad is a terrorist, but he did not reveal any of them to the local media. [Photo: Assad and two of his children in their Gothenburg flat, © Goteborg Posten]

You can read the entire New Yorker article here.