For those interested in the development of the Arab Blogosphere, here is an interview I did with Egyptian blogger Wael Abbas, who just last month was named last month winner of the prestigious Knight International Journalism Award. I enjoyed talking with Wael. He was very eloquent and quite determined to expose corruption and human rights violations in Egypt. You can read the full interview on the International Journalist’s Network. Here is an excerpt: 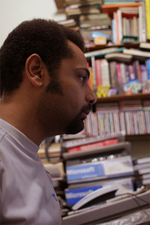 For 33-year-old Egyptian Wael Abbas, the Web log is not merely a personal journal; he has a specific mission. He sees his blog as an avenue for freedom of speech in a country that has relatively little of it.

Legal harassment of independent journalism is common. According to the Egyptian Organization for Human Rights, there were 85 criminal cases against the press from 2004 to 2006. It was in this atmosphere that Abbas launched his Egyptian Awareness blog, available at http://misrdigital.blogspirit.com [Arabic].

He says he took it upon himself to expose human rights violations in Egyptian society and shed light on issues of corruption and torture, among others.  In an interview, Abbas told IJNet that what compelled him to start his blog was "the need for real, transparent, independent media that cover stuff often neglected by mainstream media." Armed with a video camera, Abbas sees video blogging as a way to silence skeptics of his reporting. "I focused on images and video footage so that no on can discredit my work," he said. He uses colloquial Egyptian Arabic on his site to appeal to a younger generation that might find traditional reporting "boring."