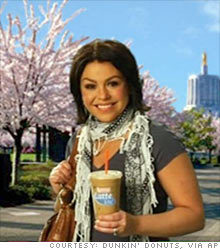 Reader ‘Dunkin’ asked me my thoughts on the Rachel Ray – Dunkin Donuts controversy. I have been talking about this issue extensively with my coworkers lately, so I’ll just reiterate myself here. I’m extremely disappointed that Dunkin Donuts backed down and listen to a misguided blogger, who is obviously oblivious to Arab and Muslim culture and diversity.

My grandfather, Saliba (whose name means ‘cross’ in Arabic), wore his Kuffayeh almost his entire life. He never took it off. When he used to go to church, he used to take off the rope circlet, which is placed atop the Kuffayeh (iqal), as a sign of respect.

The Kuffayeh is part of the national dress of a whole nation. It is a shame that it is portrayed in this light by a misguided and (I hate to say it) bigoted blogger who referred to the Kuffayeh as "the traditional scarf of Arab men that has come to symbolize murderous Palestinian jihad." It is unfortunately true that the Kuffayeh was worn by extremists during some of their actions but the acts of a minority should not stain the rich and diverse culture of an entire population.

Ms Malkin, my grandfather, Saliba, along with my uncles and cousins have nothing to do with what you referred to as "murderous Palestinian jihad," so you are way off base here. And it is a shame that Dunkin Donuts complied to these bigoted remarks by an ignorant yet influential blogger.