Steve Jobs is my Obama 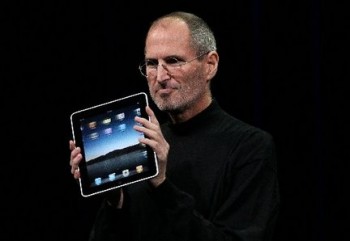 The night President Obama decided to address the American people I was home, on my sofa, under a down comforter. On the table across from me were a bottle of Chianti and some chips (with zero trans fat!). I was tired, cold, and cantankerous. I had had a long day at work and was dwelling in self-doubt and engaged in a prolonged session of self- flagellation. The last thing I wanted to do was to listen to the president tell us how things were horrible. All I wanted to do was watch crime shows and fall asleep on the sofa.

My husband didn’t like my plan. He wanted to watch the State of the Union. “You can’t miss it, come on, you are journalist. It only happens once year.” I resisted, of course, saying that I was tried of politicians and their speeches, and that the only thing I really, really wanted to do was watch crime shows. He let it go since he is a nice guy, unlike me, and let me flip channels to my heart’s content. I never got to watch anything. I fell asleep before nine, right before the president’ address started and right before any crime show began. Husband wins –  once again!

The next morning, I grabbed the Washington Post, jumped on the metro, and headed to work. The main story was, of course, about the State of the Union. Apparently, the president talked the night before about unemployment, green energy, and the economy. Yawn! For someone who grew up in the Middle East and who was weaned on political speeches and patriotic songs, the article didn’t offer anything new or unique.

The story that was right beneath it, though, was one that made my eyes light up. It was about Steve Job’s latest toy, the iPad. Of course, I read the article with great gusto, thinking of the day I buy this toy and how it will enrich my life.

That’s when it hit me that it is actually Jobs not Obama who is altering the way we live, bringing the much needed “change” to our lives. He is the one making us more efficient, more connected, savvier, and eventually happier. Yes, ladies, and gentlemen, Steve Jobs is my Obama.