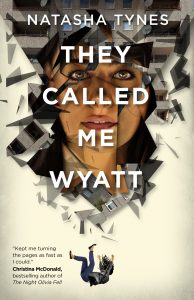 When Jordanian student Siwar Salaiha is murdered on her birthday in College Park, Maryland, her consciousness survives, finding refuge in the body of a Seattle baby boy. Stuck in this speech delayed three-year old body, Siwar tries but fails to communicate with Wyatt’s parents, instead she focuses on solving the mystery behind her murder. Eventually, her consciousness goes into a dormant state after Wyatt undergoes a major medical procedure.

Fast-forward twenty-two years. Wyatt is a young man with an affinity towards the Middle East and a fear of heights. While working on his graduate degree in Middle Eastern studies, Wyatt learns about Siwar’s death, which occurred twenty-five years ago. For reasons he can’t explain, he grows obsessed with Siwar and spends months investigating her death, which police at the time erroneously ruled as suicide. His investigation forces him to open a door he has kept shut all his life, a spiritual connection to an unknown entity that he frequently refused to acknowledge. His leads take him to Amman, Jordan where after talking to her friends and family members and through his special connection with the deceased, he discovers a clue that unravels the mystery of her death. Will Siwar get justice after all?

You can pre-order They Called Me Wyatt now from Amazon.

Praise for “They Called Me Wyatt”

“Compelling and original! I loved following the unique voice and plotting to find out who killed Siwar. Definitely recommend for anyone who loves cross-cultural novels, mysteries, or just a great book.”

“They Called Me Wyatt is a brilliantly imaginative and riveting tale of cross cultures as well as personal triumph and struggle. It is a great page-turner and the author is able to weave details and focus on the larger questions of life and love.”

“An intriguing novel that had me instantly engaged. With original plotting and characters I adored, this was a quick read that kept my turning the pages as fast as I could to find out who killed Siwar and why. The book expertly blurs genres, a little thriller and a little supernatural, and I love that it takes place in both Jordan and the US. The voice of Wyatt himself as he grows is eloquently done. I enjoyed this character-driven thriller.”

“A rich, inventive story of violence, gender, and rebirth. I loved following Siwar’s voice from Amman to College Park and into the mind of Wyatt.”

“Wow, what a story! It was a quick compelling read and so well done. I HAD to know the answer to the central question: who killed Siwar? And that answer is totally a dozy. But more than that, I just fell in love with the characters in this story.

“The entire case is so flawed and real. The whole world created by the author is gray, in the best way possible. No one is perfect and yet I still liked all of them: Siwar, Wyatt, Hoda, Krista, each one in their own way. There were a few villains but mostly this is a story of people, each trying to make his or her way in the world and find some way to belong, some way to exist, and some way to be at peace, which I appreciated so much and really connected with.

“And can we talk about the author’s voice? WOW. It is totally unique and distinct and gripping and captivating. I am so happy I got to read this book and totally recommend it.”

“I grew up in West Amman in the 80s and 90s, and later on in my life I decided to become a writer. I felt that our stories, the stories of people living in this area and that time have been rarely told. As if that “westernized” part of the city is not good enough to be part of the overall cultural scene of the country. That’s why They Called Me Wyatt is so dear to me. It is a story that I wished to read in my twenties, a story that brings back to life all of those beautiful memories of places, people and interactions we lived and cherished but never suitably documented. In her debut novel, Natasha does a brilliant job in reviving nostalgic memories in a gripping storyline, a plot that highlights issues of identity and a language that is clean, precise and very eloquent.”

—Fadi Zaghmout, author of The Bride of Amman

“Natasha Tynes’ “They Called Me Wyatt” starts with an irresistible concept—a murder victim’s soul trapped in a toddler’s body, unable to communicate what happened beyond screams and tantrums—and only gets better from there. Both sensitive and unsparing, “They Called Me Wyatt” explores the lives of young Jordanians simultaneously bound by the strictures of their home country, and experiencing the freedom—and the bias—of life in the United States. An absorbing read, guaranteed to prompt terrific book group discussions.”

“Inventive, fresh, brilliant. THEY CALLED ME WYATT transports readers deep inside the mind of a dead Jordanian woman who is trapped inside an American toddler’s body while trying to solve her own murder. Tynes showcases a unique voice, seamless prose, and profound human insights. An author to watch.

—K.J. Howe, bestselling author of THE FREEDOM BROKER and SKYJACK