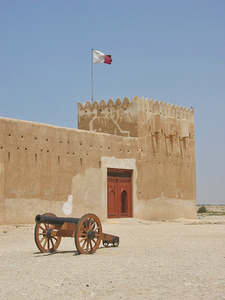 We had a very nice day today with Amal on a half-day trip to the north of Qatar. The excursion began at 9:00 am when we were picked up by a driver from Qatar International Tours who took us to our first stop of the day: Al Khor, Qatar’s second largest city. There was nothing much in this sleepy city besides a beach and a museum. We were amazed to see how little development had occurred in the second largest city when compared to Doha. Somehow it made us feel grateful to live in the Qatari capital.

We continued our trip north and stopped by Zubara fort [seen here], which was built in 1938 for military purposes and used against the Brits and Bahrainis. This was followed by a stopover at some excavations nearby. We then made our way further north to the last point in Qatar before the sea: al-Rowais, where we stopped for lunch at a traditional Qatari house. We also got to visit a high-end tent Majlis (complete with pool table and A/C), which is where Qatari men hang out. 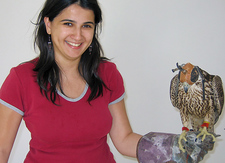 There we had a nice chat with a young Qatari man by the name of Ali about traditional marriages here. Amal and I asked him about the Qatari marriage tradition of not seeing one’s spouse until the wedding night. Ali had no problem with it and fully respected it, saying his parents have been happily married for thirty years now following the same tradition. After our brief chit-chat, Ali took us inside an adjacent house where he raised falcons. He insisted on us holding the birds and taking pictures with them. This was loads of fun. Those falcons are just fascinating creatures.

All in all we had a great time. It is a trip I would highly recommend to anyone visiting or currently residing in Doha. It is always refreshing to see Qatari landmarks besides air-conditioned malls and five-star hotels.