Israeli, Palestinian and Jordanian DJs get together 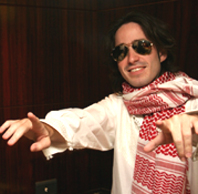 An Israeli club DJ who has helped make ethnic Arab music the hottest late-night trend in fashionable nightspots in Tel Aviv and Jerusalem, the 26-year-old Tel Avivian said to himself ‘if Arab music has become so popular among Israelis, then bringing Arab DJs to Israel will be even better.’

So last week, Einhorn made history of sorts by bringing together Palestinian, Jordanian and Israeli DJs under one roof in Jerusalem in the name of coexistence and a common love of fusing together traditional Arab music with club rhythms.

Why I am not surprised that this was not reported in the Jordanian press? I guess journalists shy away from covering these kinds of stories for fear of being labeled "normalizers." I believe these initiatives should be highlighted in the local and the international press as it shows that in spite of the bloody mayhem taking place in our region we can still co-exist peacefully and even create music.