My byline in an Oxford University Press publication 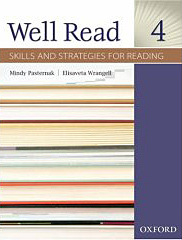 Last year, I was contacted by Oxford University Press for permission to reprint an article that I had written for The Jordan Times some years ago. I was really pleased and humbled that such a prestigious publisher was interested in my work. I gave them permission to publish my work instantly and waited patiently for the book to be published. The book, called Well Read 4, is a an educational textbook that encourages English students to embrace reading. Here is how the book is described at Amazon.com:

Well Read 4 has a number of articles by various contributors. I received a copy of it a few days ago and could not be happier to have my name associated with such a top-notch publisher. At this moment of my life I’m feeling grateful. The article that was selected was an interview with Jordanian director Jackie Oweis Sawiris. Here is an excerpt:

AMMAN — The travails of Raz, a young Arab American woman searching for her true self, is the theme of a feature film that producers hope to shoot entirely in Jordan but with the western market as its target audience. The film project, "Falls the Shadow," is the brainchild of Jackie Oweis Sawiris, an Arab American director, born of a Jordanian mother and Egyptian father.

"It is a semi-autobiographical epic love story of denial, the search for and, ultimately, the acceptance of self," explained Sawiris, also a screenwriter and an actress. For the enthusiastic 39-year-old, the efforts she is exerting are not just about making a movie. The film would be a prototype upon which other Jordanian film productions could be based, helping the burgeoning film community here "develop into a commercially competitive entity within the global media marketplace," she explained.

You can read the whole article here.