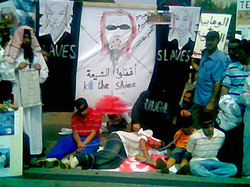 One of the highlights of my day is my lunch break. And it’s not just because I get to take a breather and step away from the computer screen. I can also take a walk in nearby Lafayette Park and watch the chess players, the lobbyists, the dog walkers and of course the demonstrators.

Last Friday, while munching on my Cosi salad, I saw a large number of people chanting while holding banners as they approached the fenced gate of the White House. I finished my salad quickly and jogged over to the White House to see what was happening. To my surprise, I saw a sizable group of Iraqis carrying anti-Wahabism signs and other banners condemning the Saudi regime for what they believe is Saudi involvement in supporting the Iraqi insurgency. I assumed the demonstrators were Shia, mainly because of the Shia slogans some demonstrators carried that hailed Imam Hussein.

I spoke with a couple of demonstrators and they told me that they had come all the way from Detroit to stage their protest. They also informed me that before coming to the White House they had been demonstrating in front of the Saudi embassy in DC but they were not allowed inside. I took a picture of the demonstration using my outdated Nokia mobile phone, so I apologize for the quality. But if you look closely you can see some people staging what looks like a scene with an armed man (dressed in black) trying to kill another man. If you look still closer, you will see a banner saying Ø£Ù‚ØªÙ„ÙˆØ§ Ø§Ù„Ø´ÙŠØ¹Ø© (Kill the Shia). I did not hang around for long, as I had to get back to work. On my way back I passed by the chess players, the lobbyists and the dog walkers. Life had resumed to normal in this cosmopolitan city, which has seen countless demonstrations.

A few days after seeing the protest, I read a news item about the banning of Alhayat newspaper by Saudi authorities due to a story the paper ran that said a Saudi extremist had played a key role in a violent Iraqi al-Qaida front group.