Obama’s Middle East: ‘Change we can believe in’? 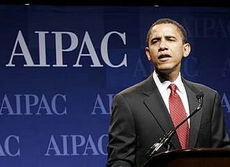 The Washington Post ran an editorial today entitled "Mr. Obama’s Middle East" in which they opined that Obama "doesn’t see the region much differently than President Bush does."

This editorial comes right after Obama’s speech to the Jewish lobbyist group AIPAC earlier in the week during which he said, "Jerusalem will remain the capital of Israel and it must remain undivided." His speech also revealed him to be hawkish about Iran.

For those that have not been following the latest developments, Obama’s speech angered many in the Arab world, especially Palestinians. After the interview, Saeb Erekat, the chief Palestinian negotiator, told Al Jazeera Thursday: "This is the worst thing to happen to us since 1967 … he has given ammunition to extremists across the region. What really disappoints me is that someone like Barack Obama, who runs a campaign on the theme of change — when it comes to AIPAC and what’s needed to be said differently about the Palestinian state — he fails.”

Mr. Obama opened his general election campaign this week with a major speech on Middle East policy, the substantive strategy he outlined was, in many respects, not very much different from that of the Bush administration — or that of Republican Sen. John McCain (R-Ariz.). That’s not a bad thing; rather, it’s a demonstration that there is a strong bipartisan consensus about America’s vital interests in the Middle East and that the sensible options for defending them are relatively limited.”

As I said before on this blog, I think Obama is charismatic but I never completely bought his message of "change." At least when it comes to the Middle East, it doesn’t seem he will bring any tangible change. When I endorsed Clinton, my friends and readers of this blog were unimpressed. A comment from reader Arabi put it like this:

Actually to put it differently, its not Hillary that is hated in the Arab world, its Hillary that hates the Arab world. Hillary was viewed positively for a long time until she made her choice and instead of trying to be an honest broker (as possible as that is given the influence of the Jewish community) like Bill did, she chose to [alienate] herself from many including the Palestinians. It does not surprise me though that you would support her. At the end of the day, the Jewish community will buy Obama as well (already started to).

I’m currently halfway through Obama’s biography Dreams from My Father, and I’m enjoying it. If my citizenship application is finalized before November, I would vote for him over McCain. However, I do not foresee any radical change if he becomes president, especially when it comes to the Middle East. Actually, I still believe Hillary would have been a better choice. But ah well, the people chose and they chose Obama. I need to get over it and move on. Anyway, let’s see what the future holds. Meanwhile, my friend Dan is ecstatic.