Salman Rushdie, up close and personal 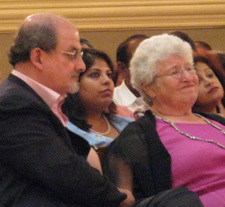 During my teenage years in Amman in the late 80’s the name Salman Rushdie was the talk of the town. Shortly after the release of his book, Satanic Verses, Rushdie was portrayed in the local media as the devil incarnate and his book was banned in Jordan (and the rest of the Arab world if I’m not mistaken). Since then I have always been intrigued by Rushdie. What prompted him to write this very controversial book, I wondered. How can he lead a normal life after Khomeini issued a fatwa that legitimized his murder? Since then, I’ve followed his news with great interest. I read about the various awards he’s won, his knighthood by the Queen of England and his brief marriage to a supermodel.

So, when I read the news about his appearance in DC I quickly snapped up tickets to see him read from his latest book, The Enchantress of Florence, at an event organized by Politics and Prose. I expected to see a bitter, cantankerous man with nothing to offer but hate speech. I was mistaken. What I saw was a happy, highly likable man with a marvelous sense of humor. He was extremely down to earth and even made jokes that were self-deprecating. I made a quick comment when my turn came for him to sign my book. "You must be tired by now," I said pointing at the crowd of people waiting for his signature. He said no, he was not tired, then pointing to his pen he explained it was an "Olympic pen" that can sign in a very speedy manner.

I was also surprised by the lack of security guards around such a controversial figure. Somehow I thought he would be surrounded by an entourage of bodyguards. I was mistaken.I really did not notice any security personnel. Maybe they were undercover. Who knows! 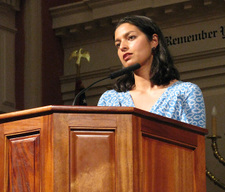 I have to admit, though, I have never read any of his books. I started reading The Ground Beneath Her Feet and thought it was the best writing I had ever read. Unfortunately, I could not finish it because I had to return the book to my friend before I headed to London to pursue a post-graduate degree. Now, after attending his reading I feel I need to get this book soon.

Another reason I expected Rushdie to be aloof and stone-faced was a book reading (Unaccustomed Earth) by Jhumpa Lahiri that I attended last month. I was surprised by how distant and detached Lahiri seemed during her reading. It must be a writer thing, I thought to myself. Rushdie proved me wrong.

I have to admit that I’m a bit uncomfortable about writing about Rushdie on this blog because I know some readers will be very quick to attack me and accuse me of endorsing his controversial views. However, attending this reading left such an impression on me that I believe it deserves a whole post regardless of the consequences.