Will they be able to spin this one?

So the truth regarding the assassination of Rafiq Al-Harriri is finally out. The Melhis report boldly points a finger at top Syrian intelligence officials. Surprise, surprise!

I wonder how believers in conspiracy theories in the Arab world (and there are loads of them) will spin this one? How will they find a way to pin the blame on the favorite Middle East culprits, the US or Israel? It will be interesting to watch. Never underestimate the creativity of analysts in the Middle East.

The admirable Lebanese people never fell for his trap, immediately pin-pointing the culprits. Who can forget the demonstrator’s famous chant "Bashar itla3 Barra" or "Bashar get out of here!"

One thing I have been thinking about for the past week or so: How do Syrians feel about the findings of the Melhis report?

UPDATE: Here is a quick wrap up of comments from Syrian bloggers: 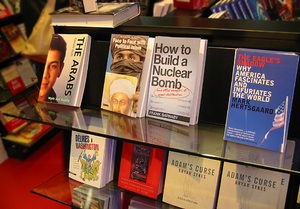 Following the bomb that rocked the eastern part of Beirut today, I feel
compelled to share with you a picture featured in the gallery of a curious collection of books being sold in a Beirut bookshop while we were there last year.

If you look closely, you’ll notice there is one book with the
eerie title: "How to build a nuclear bomb," sitting next to titles someone felt were relevant.

What happened this morning is very sad, as it might trigger a further escalation in violence in this beautiful country with beautiful people. Here is the Lebanese blogger Raja’s take on this morning’s blast.

Lebanese blogger Raja, writes passionately about Nasr Allah shattering the Lebanese dream of unity. His post is worth highlighting:

My impulse tells me that Nasrallah is responsible for this division. He is responsible because he made the decision to not join the opposition’s ranks. Thus far, all we can do is speculate what his rationale behind that decision was. I hope it was a good one though … because he is responsible for shattering the illusion of unity. For although it was an illusion, it had strength; and in the future, when we all look back to this moment in time we’re going to say: "oh that was a frightening stage in our history… a stage where sectarian animosity spilled out into the streets."

Had Nasrallah made a different choice, we might have looked back on these past few weeks and said: "those were the glorious days… the days when Lebanese forgot about their sectarian animosities and united behind a single message." Nasrallah … why??? was it worth it??? You shattered our dream!

I don’t think I have the right to rant about the politics of Hizb Allah, as I’m just a Jordanian voyeur. But if I was Lebanese I probably would have felt the same as Raja. Watching from afar, I think Nasr Allah is making a huge mistake opposing the "people power" that took to the streets. I’m a believer in the school of thought that says Hizb Allah should be disarmed. They don’t need arms after liberating the south. Well, I’m just a voyeur. I’ll leave the punditry on this to folks like Raja.

I can’t really recall opposition groups in Jordan waving Jordanian flags while protesting. What I remember — vividly — is the burning of Israeli flags. Waving a Jordanian flag is definitely novel, at least to me.

Are they being affected by the recent demonstrations in Lebanon? Even Hezbollah was seen demonstrating two days ago with the Lebanese flag and not their usual party flag (a machine gun and a fist). If this is the case with the Jordanian opposition, I must admit it is a smart change, as it makes them look less like dividers of the nation.

I polled and posted previously regarding my position on the whole professional unions dilemma and great discussion ensued, so I will not repeat myself. I just thought the picture revealed an interesting change of tactic among the demonstrators. Here is the full story if you are interested.

Those Kuwaiti women kick ass. Their demonstration now is being dubbed the Blue Revolution. They want their rights and they want them now. Good for them. Around 500 women demonstrated yesterday in front of parliament, demanding MPs pass legislation giving them the right to vote. If you care to hear my humble opinion, I’d say this is yet another sign of the winds of change blowing through the Middle East.

It seems to be a domino effect ladies and gentleman. It began with Iraqis defying the “You vote, you die” challenge put before them. Then it was the Egyptians shouting "Kifayeh," or enough, to the rule of Mubarak, which prompted an amendment to their constitution. Then the Cedar Revolution in Lebanon (also being called the ‘Enough’ Revoltuion) that prompted the government to step down and now this! This is making me hopeful.

I hope this will encourage Jordanian women activists to demonstrate, yet again, regarding the honor crimes issue, which, sadly enough, is condoned by some Jordanian MPs.

These pictures enlarge on click. More images from the demonstration can be found here and here.

Via: [Or Does It Explode]