Last weekend, the amazing Mom T arranged a "welcome-to-the US" reception for us at their wonderful home in the Shenandoah Valley of Virginia. The idea behind the event was for friends of the ‘senior’ Tynes’ to greet the husband and his "not so new" wife, which happens to be yours truly.

The event turned out beautifully, as I was able to meet and greet a huge number of people that were extremely friendly, welcoming and quite generous. That’s right. Many of those attending the reception brought wonderful gifts with them, making this ‘reception’ feel like a second wedding.

I also got a chance to finally meet some of the husband’s life-long friends whom I’d heard so much about. It was a real pleasure to hear some anecdotes of the husband’s younger days as told with a wink and a nod by Jeff’s childhood’s compatriots.

Even two of my Jordanian friends who live in the DC Metro area made it to the reception, something that meant a great deal to me since they drove over two hours just to be part of the festivity.

Mom T had worked for nearly a month on the reception and it showed, turning out truly super-fantastic. From wonderful invitations, to a tremendous assortment of food and drinks and, of course, lovely decorations, the event was just perfect. It was really special to feel like a bride one more time! Thanks Mom T and thanks for everyone who helped make the reception a great success, and that include Dad T and Aunt G.

Quick thoughts about my first Thanksgiving

My primary impression from my first Thanksgiving experience is that this particular festivity could have been an Arab celebration. I mean, it is really all about eating and meeting family. How more Arab can it get? I think Thanksgiving is my favorite of the holidays thus far, as it hits so close to home with its similarity to the culture in which I was born and raised.

We had a great time with the husband’s family and I got the rewarding experience of meeting some family members for the very first time. The food was very good and extremely filling. I also felt really proud to be able to contribute to the meal by making one of my “very easy” casseroles.

Then came Black Friday. Experiencing it for the first time was also an adventure worthy of documentation. The husband tried to talk me into waking up at 5:00 am to partake in one of those early bird – door buster deals but I vociferously refused. No amount of purchasing power in the world would tear me from the warmth of our bed at the crack of dawn, particularly to spend money on things I’m not sure I really wanted. Oh, and it was -10˚ Celsius.

Eventually, we both decided to join in on the latter part of Black Friday, after 12:00pm. And yes, sadly enough, I succumbed to the capitalist binge and ended up buying a number of items that I needed but, in truth, could have lived without! Ah, they got me! Happy Thanksgiving everyone!

The Shenandoah Valley’s cornucopia of color 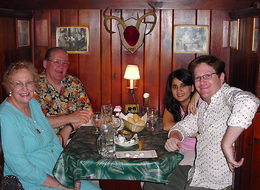 Two days ago I turned 29. On that morning, I woke up in a sour mood knowing that the 8th of July 2005 marked the beginning of the last year of my twenties. Eventually, I got over it and managed to have a great day celebrating with the husband and Dad and Mom T. They took me out to a top-notch restaurant just outside of Harrisonburg called The Bluestone Inn.

This restaurant is a bit of a local secret and quite unique. You dine under the mounted heads of hunted animals like deer, bear, moose, etc that are hung all over walls covered in memorabilia. The food was fantastic and the baked scallops that I picked were just orgasmic. After the fantastic dinner we returned home for some cake, champagne and a gift opening session. It was a wonderful way to celebrate such a depressing age.

It is also worth noting that the 8th of July marked the one year anniversary of this blog’s presence on TypePad. It was a birthday gift from the husband last year and what a wonderful gift it turned out to be.

Monday was my first 4th of July in the USA and what a day it was. Every second of it was memorable. We started the day early, as the husband, Dad and Mom T, Grandma G and myself packed up a delicious lunch we’d prepared the night before and made our way to Shenandoah National Park for an Independence Day picnic.

The park itself was absolutely stunning. Situated along the top of the Blue Ridge Mountains, the park is a haven for forest creatures including deer and bears! But the best part of our adventure was dining with deer.

While we were driving through the mountain to look for a good location to settle down and have our meal, we crossed the path of a large number of deer. Some were wandering around, others were crossing the road and some others were just chilling by the roadside eating grass. It was quite a scene.

But the most fascinating exchange occurred when one deer approached our lunch table after we’d finally settled down. Apparently the deer was hungry and wanted to grab some of the goodies on our table. We didn’t feed it, as it is against the law to feed wild animals for fear of making pests out of them. This was all new to me.

So, the deer left our table disappointed but continued to circulate and then some minutes later it was accompanied by another one. Both deer entertained themselves by chasing each about the park while we sat eating and enjoying their circular motion. I have to admit that was my first meal with deer.

In the evening we headed to downtown Harrisonburg where a plethora of activities were taking place. The highlight was Eddie from Ohio, an American folk band that enchanted us with their upbeat, whimsical songs. A display of colorful fireworks wrapped up our wonderful day, as we sat on chairs on the grass in the middle of Harrisonburg’s court square and looked up into the dark blue sky as it was lit by a wonderful mélange of sight and sound. Ah, what a day. Happy Fourth of July everyone! 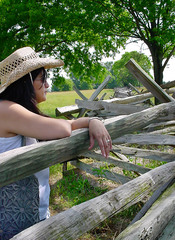 We had a wonderful weekend. It was so wonderful that I had to blog about it. It began early Saturday when we made our way to the city of Charlottesville, VA primarily to wander around its very lively pedestrian plaza downtown. The weather was nice, although a bit on the hot side, but overall the atmosphere was very enjoyable. We examined what downtown had to offer, which consisted primarily of restaurants, art galleries, quaint little shops and several movie theaters.

After some walking and window-shopping, we had a great lunch at the Hardware Store, an extremely unique restaurant built inside what was once just that and now is filled with its memorabilia. Right after lunch we walked down to the Regal movie theater and watched the Land of the Dead, which I thought was too disgusting for such a nice day, as it is a movie about the dead rising up and eating the living; not really my cup of tea.

After the flick, we wandered around looking for any sign that the city is indeed the home of Dave Matthews. We visited Miller’s Bar, where Dave worked as a bartender some time ago. It was nothing spectacular but was something related to this great artist. Before leaving, we had a drink at an outdoor Italian café and watched the patrons of downtown enjoy their time as the area began to fill up for the evening.

Around five o’clock, we made our way back over the mountain to downtown Harrisonburg to watch the Great American Race, where antique cars race across the USA, from Washington DC to Washington state.

Downtown Harrisonburg was buzzing with excitement. While many people were cheering the incoming flow of antique autos, others were admiring and taking pictures of those already arrived and parked. Some were just enjoying the live music and good food. It was exhilarating! We really got to see a plethora of cars — none made later than the 1960s — in every shape and color. It really was a memorable scene.

Sunday had an historic flavor as well, as we, along with Dad and Mom T, made our way to the town of New Market, VA to visit the civil war museum there. The visit was very informative for me personally, as my prior knowledge of the American Civil War was pretty limited.

When we got there, we wandered around the field where a famous Civil War battle took place, wandering around the famous Field of Lost Shoes, and took a look inside the house where soldiers were tended during and after the battle. We also watched a documentary about the battle and looked at Civil War artifacts displayed in the museum. It was very educational and an extremely enjoyable manner to get acquainted with an event that shaped American history.

All in all, our weekend was a fine and memorable one. Virginia has a lot to offer and I’m very grateful to have this fantastic chance to explore these fascinating locales.